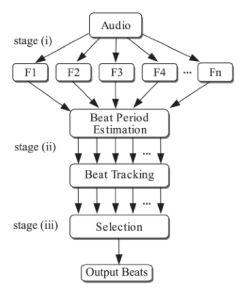 Our article on multi-feature beat tracking for the IEEE/ACM Transactions on Audio, Speech and Signal Processing is now available online! This is a work carried leaded by Jose Ricardo Zapata for his PhD thesis in collaboration with Mathew Davies from the SMC group in Porto, based on the idea of combining different experts, represented by periodicity from different onset detection functions, for beat estimation. This is a simple and clever idea, already used to combine different beat tracking algorithms and evaluate the difficulty of the task, that has been integrated in a different method.

A recent trend in the field of beat tracking for musical audio signals has been to explore techniques for measuring the level of agreement and disagreement between a committee of beat tracking algorithms. By using beat tracking evaluation methods to compare all pairwise combinations of beat tracker outputs, it has been shown that selecting the beat tracker which most agrees with the remainder of the committee, on a song-by-song basis, leads to improved performance which surpasses the accuracy of any individual beat tracker used on its own. In this paper we extend this idea towards presenting a single, standalone beat tracking solution which can exploit the benefit of mutual agreement without the need to run multiple separate beat tracking algorithms. In contrast to existing work, we re-cast the problem as one of selecting between the beat outputs resulting from a single beat tracking model with multiple, diverse input features. Through extended evaluation on a large annotated database, we show that our multi-feature beat tracker can outperform the state of the art, and thereby demonstrate that there is sufficient diversity in input features for beat tracking, without the need for multiple tracking models.